Viagginbici.com > Family on bikes > MILAN: MARTESANA PATH, A STEP BACK IN TIME

MILAN: MARTESANA PATH, A STEP BACK IN TIME 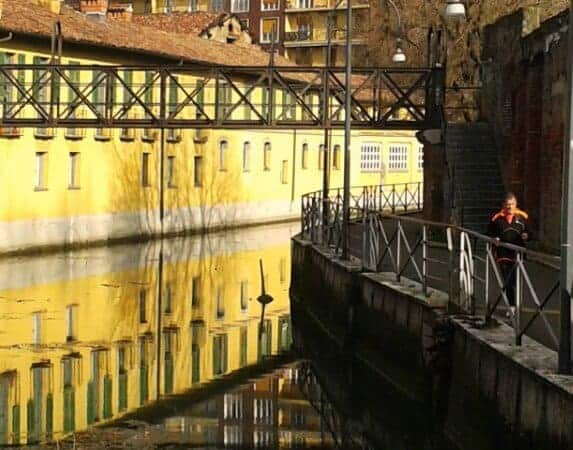 Biking in Milan along Martesana

The cycling lane that follows the Martesana canal leaves Milan in a manner of elegance, like a lady from another time, indifferent to the frenzy that surrounds her. This frenzy, is located at the beginning of what is known as the notable Via Melchiorre Gioia, where the “alzaia” of the canal is located on the right side, starting from the Cassina de’ Pomm (in front of the Parish of St. Maria Goretti, civic 193) arriving to the sanctuary of the Divine Maternity of Trezzo d’Adda. It’s about forty kilometers northeast and is flat, or slightly uphill, but just enough to barely notice. Both the cement and railings are in both in good condition, and for the most part it’s well illuminated, allowing the use of any type of bike at almost any hour.

As you’re leaving, the path weaves through Greco and Gorla moving eastward until viale Padova. If the canals are water for the gardens, the cycling lanes are the air for those surviving in the city: Sunday cyclists going for their trip downtown, daily cyclists on their commute to work, mothers and their children, kids with dogs, short-winded joggers. Altogether or for each his own, there’s plenty of space for everyone until you reach the point of the intersection where Via Padova meets the beginning of the Alpine Crescenzago which veers to the left, decisively leading onto Via Idro until it reaches the Lambro river.

In Cologno Monzese and Vimodrone, the cycling lane passes a children’s playground and is surrounded by meadows with farms and chickens, which could perhaps be where the most interesting of games are. There’s much more space all around and the horizon could be thought to be the beginning of both a cultural and historical journey through the Province of Lombardia. From the other side of the canal, mirroring the water, are two aristocratic mansions of Milan: Villa Cazzaniga Villa and Villa Alari Visconti – the eighteenth century “Villa of Delight” – as soon a you move to Cernusco. Also you will find Villa Borromeo and Villa Melzi d’Eril, as the lane climbs towar along the canal, that Leonardo da Vinci painted and lived.

In Cassina de’ Pecchi the cycling lane is located few feet from the metro station, making it tempting to take advantage of a fast and convenient return. Although convenient, it may however be quite difficult to resist because of the green line of the metro runs alongside the path leading towards Gessate, making it worthwhile to go that much further.

Upon arrival in Gorgonzola, the lane narrows into a path, located directly in front of an interesting wooded structure that overlooks the canal, like a bridge. 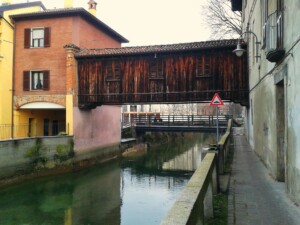 It’s no longer a living space but it’s windows and living rooms connect Villa Busca to a private condominium, where you will be curious to step inside the doors, allowing you to get a glimpse of a beautiful mosaic of Madonna and her Child, just a few meters on the left. 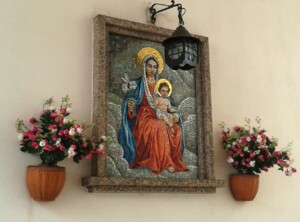 While returning to the path, you’ll cross through the country noticing a lovely terrace over the canal, part of the restaurant, “La Stazionetta” which is accessible by crossing a pedestrian bridge, put there for cyclists so they don’t have to abandon their temptation to stop by, especially around lunchtime.

You’ll also pass Bellinzago and Inago as well. There you’ll find another restaurant which deserves it’s share of attention: it’s called “The Hole”, a trattoria in Groppello, a part of Cassano d’Adda, about twenty kilometers from Milan. Positioned outside are bikes, inside a group of youth of a certain age. Teresa, the kind lady behind the counter, ensures that the restaurant keeps faith to their kitchen that consists of frogs, minnows and snails. There in the Kitchen you can find Angelo, her son.

After Groppello, the cycling lane becomes so beautiful that it’s frightening. Dirt, without banks, without lights and even nature, which comes a bit later. On the left, there’s the canal running few meters from the Adda river. It’s the North Adda Park: there’s much more forest than grass, humidity, the profume of the plants, and the sounds of animals. There’s even silence. After passing both a few kilometers and a few people, you arrive in Vaprio d’Adda. 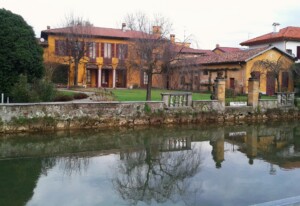 In Vaprio, the path moves alongside of the House of the Water Guard, the dwelling of the person responsible for regulating the water system where the river and canal meet, and where the locals went to make their payments. This can also be a point of view that has it’s particular beauty and charm. In between all of the other things you’ll see Bernardo Bellotto’s Rectory and four views of Vaprio. Even Leonardo studied and drew inspiration from this point of view. There’s also Villa Melzi d’Eril which is within walking distance and, thanks to recent renovation of the building, you can visit the Leonardo Adda Interactive Gallery.

The cycling lane that had once disappeared once again opens up to the road, reappearing at the end of an incline that leads to the end of the Vaprio Bridge. It’s similar to previous section, rough and wild, yet so beautiful, of course that depends on your point of view. As before, you see young children and elderly alike, running, proving that dirt doesn’t necessarily have to mean abandoned or forgotten.

After a few kilometers of forest, that is a paradise, you will find Concesa, a part of Trezzo d’Adda where the Martesana begins. Observed, monitered but also protected by the Santuary of the Divine Motherhood. This was the birthplace of the canal, in the last corner of the northeast province of Milan, there’s still plenty of fresh air and fragrant vegetation. The path dwindles along the left side and continues as a narrow path a short distance from the water. By paying close attention and with a little effort, you can reach the dam along the Adda where you will find the Visconti Castle and the Taccani hydroelectric plant.

Here you can stop to “Lavatoio”. It means “wash up”, but it’s an area that for many years hosts a café and wine bar. It’s the first of a series near the dam, allowing you to enjoy the tranquility of the water but the cycling continues, just like the lady from another time, running up to the swans of the Adda Paderna Canal until she reaches Manzoni Lecco.