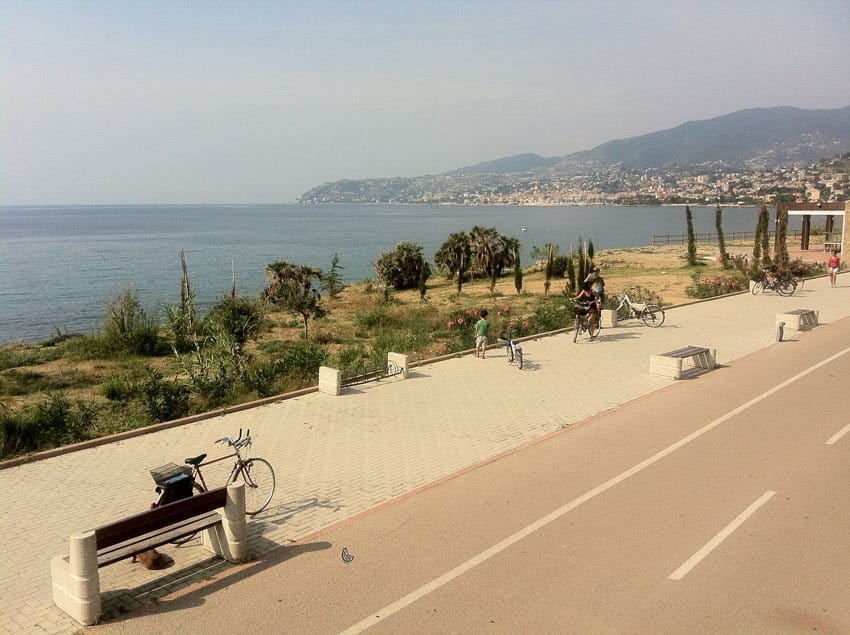 On the coast of western Liguria in recent years has been reused the old railway track to create a bike path, that without any difficulty allows you to discover some hidden views of the territory , which was in operation until the railway line were inaccessible . The trail runs about 28 km and goes from San Lorenzo al Mare to Sanremo (Ospedaletti)and is characterized by evocative passages , which bring visitors in close contact with the sea in the thin strip of land that separates the sea from the seat of the Aurelia highway .

The route starts in the center of San Lorenzo al Mare , a small coastal village built at the mouth of the Rio San Lorenzo. Access to the track is done directly by the Via Aurelia , near the parking lot of the old railway station , the trail follows the old railway route exactly . It follows a straight flanked by pedestrian promenade , recently renovated , from which you can easily access to several public beaches and cliffs below. 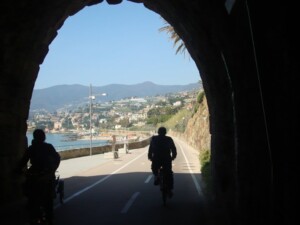 At the end of the promenade path continues through a tunnel lit very long (about 1500 meters) , which is why it can be cold and is therefore best to bring a windproof jacket . Exit was a relaxation area equipped with benches and gardens overlooking the sea . Under the track is just a little-known beach of rocks and pebbles , at the mouth of a small river , accessible via a steep staircase that leads down to the shore.
From the area equipped,the route continues parallel to the Aurelia , running a few meters down the road and close to some unique and fascinating stretches of cliffs , once completely inaccessible by rail. After a few miles the roadbed joins Aurelia finally , to arrive near an old railway into toll Aregai area . 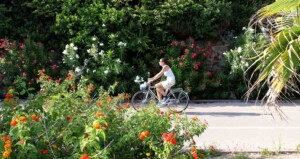 You pass first under an ancient stone bridge , which was once used to overcome the rail trail , and shortly after, with a long straight runs along the whole of the tourist port of Marina Aregai , The stretch along an area not particularly attractive to natural level , but offers a unique and spectacular glance the entire marina.
At the end of the straight you will come close to another bridge which passes from the top of the seat track. And ‘ the access road to the seafront of Santo Stefano al Mare , an ancient fishing village , characterized by a small but picturesque old town, which you should visit .

Running between the houses, then along the track widens the area of ​​the old station, and continues through cultivated fields until you reach the town of Riva Ligure. From the track is very easy access to a beautiful beach promenade and several sandy beaches equipped and free , that invite you to a refreshing bath.

THE TRAK NEAR RIVA LIGURE

At one time this area of ​​the coast was virtually unreachable because of the railroad, and the coast is therefore still in its natural state , with no settlements of any kind. At the end of this stretch of bike path, passing a few cultivated fields, before you cross the long bridge over the creek Argentina , which gives its name to the valley on which it stands Taggia and its coastal town of Arma di Taggia .
After crossing the bridge , the trail crosses the big flat area once home to the railway station of Arma . The area of the old station is in the center of the country, so it is easy to stop to ” refuel ” if we serve new energy, or just to indulge in the pleasure of tasting the famous focaccia .
Weapon has a small but significant marina, a long and beautiful pedestrian promenade that runs along its famous sandy beaches. 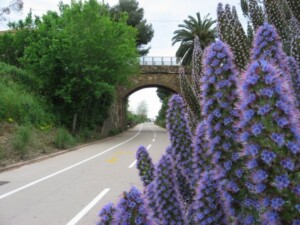 From the station, the path continues towards Bussana of Sanremo. The trail passes through a first section behind the houses of the village of Arma di Taggia. At the end of the village , the route climbs slightly and overlooking the coast and the beaches of Bussana . The panorama is stunning , and the trail continues along the path of the Aurelia and continues through some meadows and several galleries .
At the end of the last tunnel , the path runs along the resort area of Three Bridges , an area of ​​beaches very busy in the summer , before plunging in Sanremo, which runs through the heart of the city taking advantage of the location of the old railway line . Cyclists and pedestrians should pay particular attention to the various intersections of urban roads that cross the track, which should take precedence. 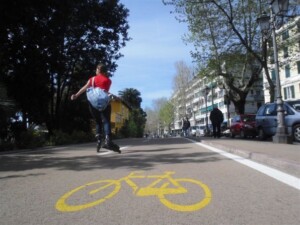 The trail has its end after the area of ​​the former , just after the end of the promenade of Corso Imperatrice and from here it is possible, in fact we encourage you to do so, visit the town , go to Via Giacomo Matteotti called ” The bath ” which is the main artery and the most chic of Sanremo, where one focuses more international shopping , fueled in particular by Arab sheikhs and Russian oligarchs , as well as its proximity to the French border and the relative proximity to Monaco .
Via Matteotti  is the concentration of every aspect of the city’s shopping , not only with exclusive boutiques of major labels, the famous Ariston Theatre, which hosts the Festival of the Italian Song , where from 2013 or even find the statue of Mike Bongiorno , but also with restaurants , especially in small stringers of the main street , where you can taste the rabbit Sanremese , a real treat ….

Recently has been completed stretch from San Remo to Ospedaletti long tunnel that passes under the Museum of Milan Sanremo, Capo Nero.