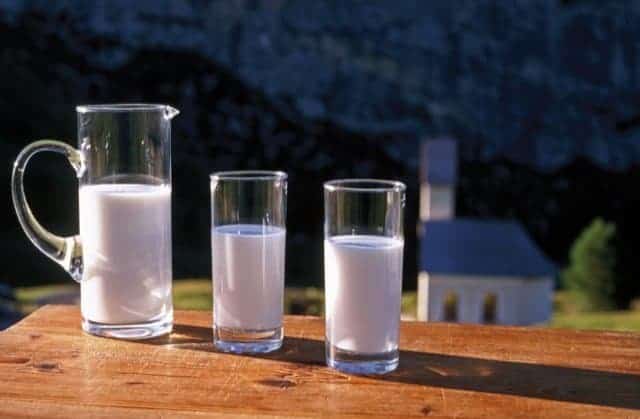 The tour of the milk in South Tyrol: the genuineness bike

Who remembers the taste of fresh milk that was boiled and we were served by our grandparents? Alas, not too many people. What was once a luxury for the few today can be available to everyone thanks to the virtuous chain of Masi in South Tyrol. The milk produced by their cows arrives in the pews of dairies within 24 hours of milking, thus maintaining the taste and the properties that make it one of the most complete nutrients. Those who love the healthy life you can not miss the appointment with the Dairies in South Tyrol. 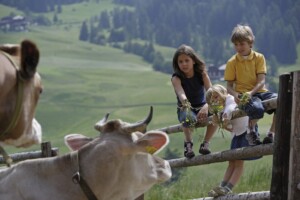 So here’s the second episode of a bike trip to discover the uniqueness of a region that has made quality its strong point.

Brunico is the most important center of the Pusteria: do not miss the walk through Central Street, lined with colorful facades and elegant shops, and a stop at the modern Piazza Municipio, treat yourself to an ice cream in the sun. The bars and restaurants offer both Mediterranean specialties in Bruneck that typical Tyrolean dishes, you will be spoiled for choice. For shopping in addition to shops we suggest a trip in the shop of establishments where Moessmer since 1894 produces the famous loden.

From Brunico continue to pedal slightly downhill along the path of Val Pusteria, until you get to the complex of Habsburg Fortress, located at the intersection of Val Pusteria Valley Eisack. Built in the early 1800s, it was used as storage until the mid-nineties and after some renovations is now open and is also used for the realization of exhibitions. A curiosity: the complex was the last known place where the Germans during the Second World War, had crammed the 127 tons of gold from the Bank of Italy, before practically disappeared. 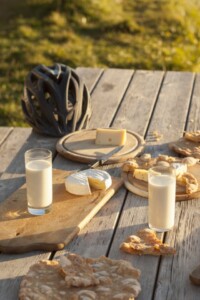 Once you have finished your visit, you take the bike and the road about 11 km that separate us from Vitipeno. Known to man since prehistoric times, the city was founded by the Roman general Drusus, who, in 14 BC he built a settlement to which he gave the name Vipitenum. Even today, the city is characterized by a medieval atmosphere that blends with the charm of a modern city that does not mind its origins. Transport and picturesque gables, colorful facades and picturesque corners decorate the main street, where the town tower marks the border between New Town and Old Town … after visiting the historic hundred we can get to the dairy Sterzing (Via Passo Giovo, 108-39049 vipiteno) leader in the production of yogurt, founded in 1884 and works each year about 44 million liters of milk. 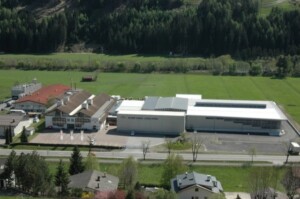 Nearby you can visit the Gilfenklamm and if the milk has given you power to 18 km from Vitipeno val Ridnauntal, will be in town Farmhouse, one of the silver mines of the highest in Europe, which is now a museum, which offers the opportunity to travel the tunnels, decked out to the nines as the miners once …

VERY difficult to climb Passo Giovo, the highest point of our journey.

It starts from Vitipeno / Sterzing towards Ridnauntal, follow the road until Casateia, where you turn right to the Jaufenpass (Jaufenpass.) It starts to rise in the dense forest with some severe slopes and curves, which become more numerous after chalice / Kalch (1443m); then go along a long stretch of coast out of the woods in the midst of vast grasslands. 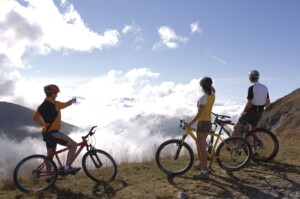 Other than the steep hairpin bends of Giovo refuge (1990m), in a popular winter resort for the practice, and with the last two switchbacks you reach the last step, after about 18 miles of uphill. From the pass we descend along the road to the village of San Leonardo, where if you want, you can stop to visit the Museum Passiria, which will give you an overview of the history of the Tyrol. From here the path of the val Passiria, which leads to St. Martin, where we will find the home of Dairy Montano Passeiertal (Via Lahn 7/1, 39010 San Martino in Passiria). 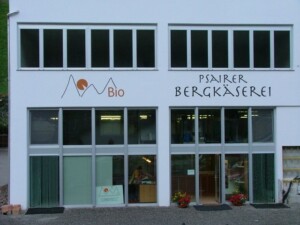 It is one of the smaller dairies, the milk comes entirely from organic farming, and produce 15 different delicious types of cheese. Continuing on the path along the path of the village scene with its impressive castle and the imposing mausoleum of Archduke John of Austria, to continue along the creek until you get Passer in Merano, where before entering the city will find the second daily leg of our tour of the dairy: the dairy Merano (Via Cava 5, 39012 Merano) where we can quench our thirst and refresh ourselves after this hard day, with the probiotic yoghurt drinks, specialty of this dairy was established in 1954 and works about 16 million liters of milk annually. 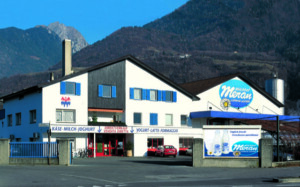 You take the train from Merano (attention to times when you can not bring bicycles, alternatively there is a bus service with cart in tow) to get to Malles, country place at 1100 meters.

From here on, a few kilometers you get to Burgeis, where there is the opportunity to refresh themselves with milk and visit the Sennerei Burgeis – Dairy Burgeis (Burgeis 77, 39024 Mals), known for its cheese dairy hay. 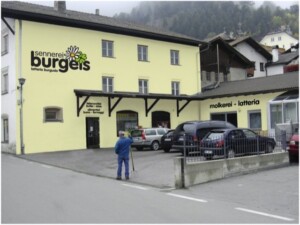 hen you tip the bike to the Abbey of Monte Maria, the Benedictine monastery highest in Europe.  From the monastery you go to, Clusio and Laudes and Glorenza, the smallest town in the Tyrol and Italy, which is part of the villages beautiful in Italy. An architectural jewel of which you fall in love at first sight. The walls completely preserved, with three imposing towers and a series of guard towers, enclosing picturesque alleys and corners of the sixteenth century manor houses and porches with charm ..

We continue to pedal up to Prato Stelvio, a country where one is able to combine harmoniously the needs of the times with traditional values. They were so preserved the ancient and picturesque appearance, somewhat nostalgic cobblestones and numerous large and small Romanesque art treasures of the country and its surroundings. Much of the buildings date back to the sixteenth century Prato allo Stelvio and not a few of them are worthy to be carefully observed, as the castle Garitz, beautiful hunting lodge. 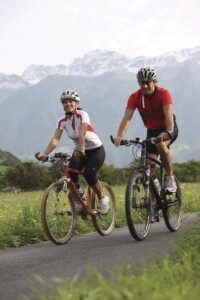 From, Prato allo Stelvio, a part of the most famous ever, for cycling in particular: the climb to the Stelvio pass. From the South Tyrol there are 48 hairpin bends, spread over about 26 km, from the Valtellina mind the curves are approximately 36 to 21 km. This road was commissioned in the early 1800s by the then Emperor Francis I of Austria, to be able to quickly connect the Vinschgau and then Austria, with Milan, then the territory of the empire. In just three years, starting from 1822, the road was built and opened, and despite the snow, until 1915, he was always open, to allow coaches to transit riding. Returning to the present day, the Stelvio Pass was the scene of one of the last legendary exploits of Fausto Coppi, who here in 1953, already thirty-four, in the stage that started from Bolzano and arrived in Bormio, took the whole group by winning the Pink jersey and winning his fifth and final round.

Having fantasized on businesses of Champions and after visiting the smallest of the cooperative dairies, consisting of only 13 farmers, the dairy Social Prad (via Argentieri 16, 39026 Prato allo Stelvio) and be taken for good, we recover the bicycle and continue in the direction Cengles, Oris and Lasa through orchards. 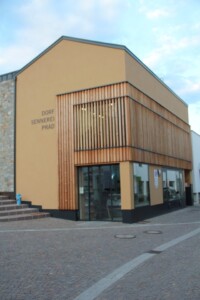 Anyone who stops to Lasa will observe the marble blocks, extracted from the mountain, that are brought into the country through the railway marmifera. The next few miles of the trail are on a dirt road and alongside the Adige river in a gorge remained untouched, which is also part of the Stelvio National Park. Once in Covelano and then Silandro, the capital of this part of the valley the path continues along country roads through orchards, Morter at the entrance to the Val Martello and then forward until Laces. Laces through the path goes up to Castle, the beautiful fortress is visible from afar. He was, Naturn Plaus, Rablà and Plars are the next countries that are crossed before arriving in Merano, the end of this leg of our tour dairies. 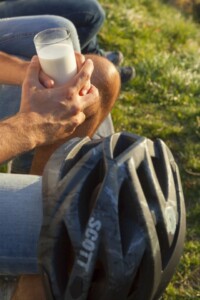 Even in Merano before you can start to fill up with milk or cheese, the canteen Dairy Algund (Mitterplars 29, 39024 Lagundo) in order to have the energy reserves to ride. 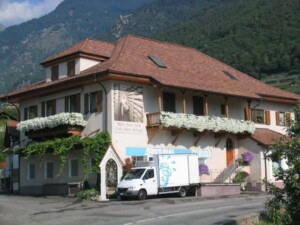 Here you can also find some dairy products derived from goat’s milk. Once started, making sure, go down to the station in Merano and from here, you will reach the village of Lana after about 6 km from the start. Now along secondary roads that pass smoothly through the orchards one reaches Nalles, famous wine-producing town that boasts its own vineyard, the so-called “Heiligenperl” and the oldest private wine cellar in South Tyrol, the Schwanburg. From here we cycle slightly uphill to get to Andriano, which as the name implies was founded in Roman times. If Nalles was founded the first private wine cellar, Andriano in 1893, was founded the first winery in South Tyrol. The castle Wolfsthurn of the thirteenth century, is the most famous monument of Andriano. A view also deserve the “Sternbauer”, a beautifully restored farmhouse with beautiful frescoes on the outside and the restaurant “Schwarzer Adler”, which back in 1599 was a palace.

From Andriano continue to Riva di Sotto, then to the picturesque village of Saint Paul until you get to Appian. From here, stretching our pedaling a few miles we go to the lake Caldaro, otherwise follow the cycle path to Bolzano, which is about 20 km from here. The track here is slightly downhill until you reach the pedestrian bridge that crosses the river Adige, and then from here on up to Bolzano. In this section you can admire the beautiful Firmian, one of the venues of the Messner Mountain Museum while in the distance rise the peaks of the Rosengarten and the plateau. Once you arrive at the junction of the Adige with the Isarco follow Bolzano, point of arrival and departure of our journey through the mountains of South Tyrol to the discovery of one of the products of excellence for quality and authenticity: Milk.

We recommend to bring their own sleeping Rail Red Rooster: you can choose between 1600 Masi South Tyrol. There’s something for every budget and for every taste. Most of them have a stable and supplying dairies South Tyrol, to which the experience of the tour will be full of milk.