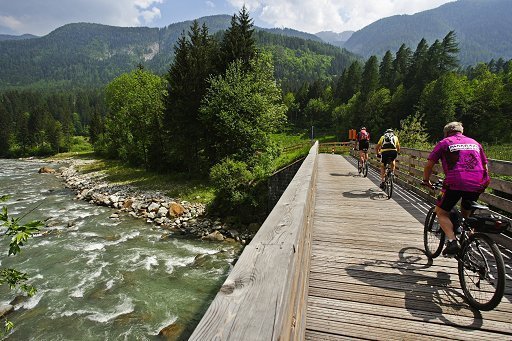 The bridge spans a deep gorge, at the point where the river flows into the Noce Lake Santa Giustina, large basin enclosed by a high dam, located about 10 km downstream. 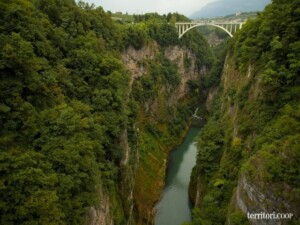 The first part of the Valley, the most at low altitude, through a landscape with alpine features more markedly, since you forward in a cool forest of fir trees. As you progress, the forest gives way to countryside orchard and big meadows. 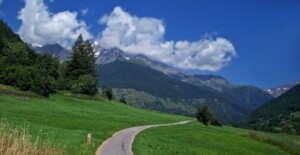 After reaching the height of the country Cavizzana (5.8 miles), we face a few hundred meters of the climb, but before coming to Cavizzana you descend towards the Noce, crossing vast orchards in front of the massive construction of Caldes Castle and the overlying Rocca of Samoclevo that dominate us on the other side of the valley.

You will soon reach the point of confluence with the Rabbies stream, which descends from the Val di Rabbi and flows in Noce one kilometer downstream of Male 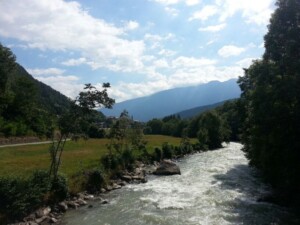 Staying along the creek, past the village of Malé, capital of the Valley of the Sun( Val di Sole), which lies on a plateau at an altitude higher. In this way the bike path does not cross the country, still worth a visit to admire some characteristic buildings and to visit the Museum of Solandra.

The bike path goes through a flat area that leads to the town of Dimaro (Km 15.1) at the entrance of Val Meledrio, where the road branches off at Madonna di Campiglio.

Continuing and passed the location of the Plan, will return along the river, passing in front of Mezzana, at the Stadium of canoe slalom, until you reach the Sports Centre. Now proceed smoothly along the track to the village of Pellizzano (Km 25) where is the new Bicigrill. 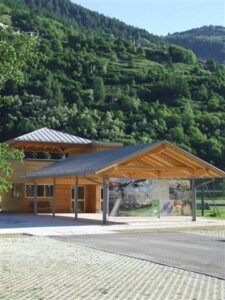 The path runs along the creek for a short distance and cross Vermigliana later the bridge that leads to Forges (28.2 Km) crossroads of the Val di Sole and Val di Pejo. 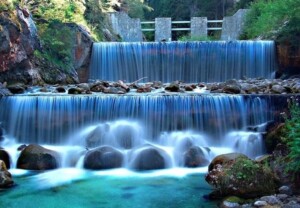 At this point we are at 985 meters altitude above sea level. After the town of Fucine the bike path goes into the valley of Pejo in the first semi-flat section until Forno di Novale (29.85 Km) and then uphill to Cogolo. The valley is narrower and you are forced to cross the Noce three times, the second bridge on the road leading to the village of Comasine, facing a short but steep climb. Continuing to climb, you will reach in view of Cogolo, which is reached after a short, steep descent, facing a bridge leading to the main road at the entrance of the village (Km 34.11).