Viagginbici.com > MTB trails > FROM MATERA STONES TO THE SEE DISCOVERING AN ANCIENT PAST

FROM MATERA STONES TO THE SEE DISCOVERING AN ANCIENT PAST

Cycling from Matera Stone to the see, discovering an ancient past

Basilicata is a land reserve emotions and unexpected surprises, turn cycling lets you enjoy all its charm. Departure is from Matera a magical city, and the arrival of our itinerary is after 60 km Metaponto, location overlooking the Ionian Sea. The path is easy and mostly downhill.

MATERA IS A NATIVITY

When you arrive for the first time in Matera, you do not believe his eyes. It’s the magic of the STONES, a unique cultural landscape in the world, partly invisible, which descends towards the center of the earth, in a succession of arches that become one with the rock. Gardens and roof gardens behind the houses carved into the tufa, forming a maze of tunnels, from which comes to life one of the oldest urban settlements.

From prehistoric presence in the caves of the Paleolithic era, the entrenched villages of the Neolithic until the rock civilization with ravines and trenches carved on the steep ridges of the Murgia, from simple systems, but ingenious of water canals, until the civitas Svevo-Norman with its fortifications and subsequent massive transformations of the fifteenth and seventeenth centuries, until the effect of the urban farmer fetched survived until the fifties. A Matera you come across a story incredible and impressive, emblematic and admirable example of the extreme adaptability and perfect harmony between man and environment. 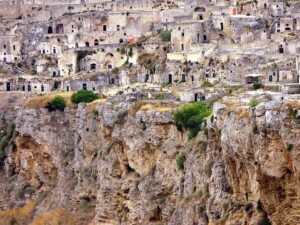 Property, trapped in the bare stone, the Sassi reserve the eyes continuously wonder and surprise. The oldest city in the world is a journey through the history of the earth A view of Italy can arouse strong emotions. First site of the South entered in the UNESCO World Heritage Site, the “capital” of history and culture that has allowed the city to apply in full as European Capital of Culture for 2019.

Biking the maze of narrow streets we go out to venture into the Rock Churches Park.

FROM MURGIA PARK  TO MONTESCAGLIOSO 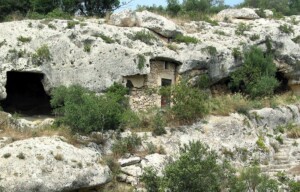 It is worth stopping along the way to the Regional Park of the Murgia Matera, to explore churches, ravines and testimonies of ancient presences. Over the centuries, the area was inhabited by shepherds and herdsmen who have left numerous traces of their dwelling in fact, there are many houses, rock settlements including San Nicola all’Ofra, Christ la Selva, Villaggio Saraceno all equipped with church rock and burial area.

Many of these facilities are complemented with iazzi, livestock enclosures cave housed in caves with stone walls that enclose the outdoor space to house cattle and sheep, always made sloping to evacuate the sewage into the compost heap and facing south, to protect the animals from cold north winds. Other forms of shelter for animals are caprili rock, the complex of caves along the ravines in inaccessible places but particularly suited to host the goat breeds. 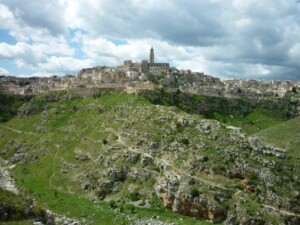 erritory, sometimes hidden by the dense vegetation and dug along the banks of the steep ravines in inaccessible and difficult to access, embellished with spectacular frescoes witness the devotion that lasted up to our days

After about twenty kilometers total you get near Montescaglioso a charming village that originally was a Byzantine stronghold, only to see a succession of different feudal families. Montescaglioso had its initial development around the abbey of St. Michael the Archangel (1079) full of beautiful frescoes.

Interesting is the mother church of the fifteenth century. dedicated to SS. Peter and Paul in which are preserved numerous paintings of the Venetian school.

Worthy of note are the church of Santo Stefano portal with pre-Renaissance and the Church of Our Lady of Grace in the Romanesque style.

After a bit ‘of kilometers snaking down between rolling hills, you arrive on the left of the river that runs along Bradano for quite a while’ (10km). Here are the olive groves and cultivated fields to accompany our bike ride.

FROM BERNALDA TO  THE SEA

The direction to take after entering a few km in Puglia is Bernalda. But before we get there we pass by Santa Maria del Vetrano where you can see a Norman tower now called Castle Vetrano. There was also a church but has collapsed and is now in a state of neglect.

After a few kilometers we reach Bernalda. The town takes its name from that of the feudal lord, Bernardino de Bernardo, secretary of the Aragonese court, who rebuilt the castle, the home of his family. 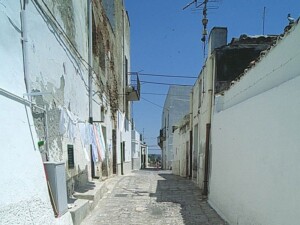 To visit, in its historic center, are the Carmelite church, the church of San Rocco and the chapel Whistles. The castle, now used for housing, has been rebuilt several times.

Next to the castle is visible the mother church of San Bernardino, with red brick exterior and Byzantine domes.

ed the various phases: the first prehistoric events, the arrival of the Greeks in the fifth century BC, the formation of the colony of Metaponto between the rivers Bradano and Basento, the romanization. The halls are exhibited artifacts of local culture and fine vessels italomicenei turned and decorated.

Many of these materials were processed on site by craftsmen who emigrated to the West. One section is devoted to weapons, personal ornaments, many of them in bronze, both male and female; the latter are particularly valuable.