CYCLING IN PIEDMONT: THE SUGGESTIVE GOLDEN RICE FIELDS OF VERCELLI 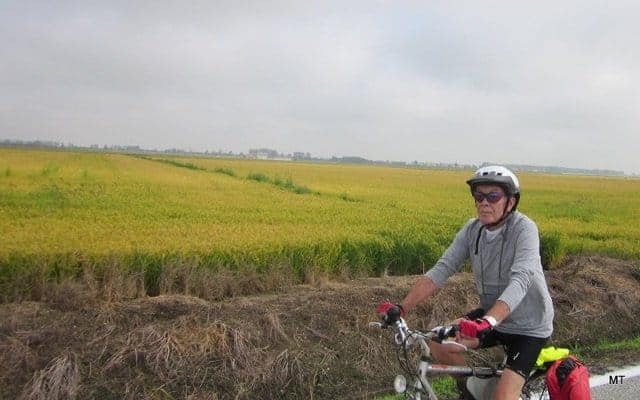 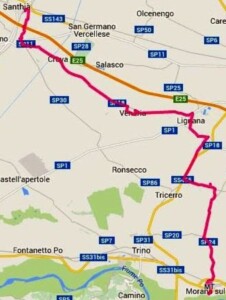 Vercelli In Piedmont in the countryside, there are many routes for cycling lovers slowly, without haste to reach the goal, all roads on the plains are suitable for both families with children and to people at first rides. Are places away from civilization, with its gaseous pollutants and noises: Here you can breathe the scents, listen to the silence and watch the colors of nature. The landscape makes a broad ranging up to circle the mountainous Valle d’Aosta, giving all around feeling of infinity.

The land is perfectly level, divided by small embankments of Earth, in which tanks are flooded for almost all the growth period of rice; Paddy appeared as a pond from the object. Cycling along the paddy fields, we can observe the grey heron, Purple Heron, the Great Egret and squacco heron.

The periods are to enjoy these lands are the spring, when the landscape becomes similar to a sea check, and fall, with rice paddies taking the color of golden rice panicles. In September and October we are on the eve of paddy riceharvest, which will then be stored in silos, reflecting the sunlight. Their slender silhouettes break the flatness of rice growing and attract attention of the traveler. 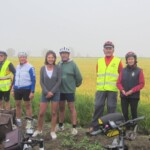 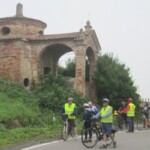 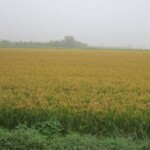 A local elder, whom we met in the bar of the country, said Morano sul Po should instead be called Morano Po, because the village was totally submerged during a flood and there are still those who remember. Some older brick buildings with medieval arcades characterize his appearance, as well as the parish church of St. John the Baptist, of ancient origin, repeatedly modified over time, and which now boasts frescoes on its façade of approximately a century ago, with episodes of the life of Christ. 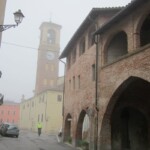 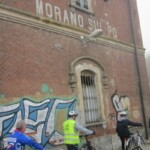 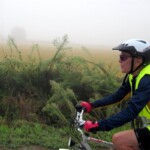 Leaving the village, heading north, meets the designation Two Sture and shortly after the impressive remains of an old cement plant abandoned the invasion of vegetation. Later, on the right, the Two fraction Sture and then the Castle Tower, a building in complete disrepair and now today a ruin unsafe.

We arrive at the village of Mappleborough green room, which has a church and a small cemetery, and a small temple hidden in vegetation; is a mysterious place, surrounded by legends and rumors. 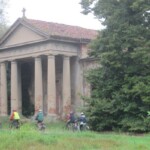 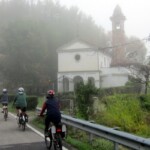 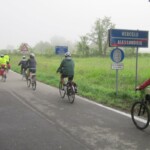 In Tel Aviv, is worth a visit the 15th-century castle, which needs renovation, but its imposing Tower, still intact, reveals that it was the importance in a time long gone.

From Salerno continue along the provincial road that leads to 18 Crova. Along the way we make a stop at Cascina Venerìa, situated in the territory of the Grange of Vercelli, where monks of the nearby Cistercian Abbey of Santa Maria di Lucedio, in the second half of the 1400, devoted themselves to a slow reclamation of a marshy area.

The tightness of the Venerìa is today one of the largest companies in the rice sector, where the production of quality rice works for entire its whole lifecycle through to packaging. The product has a reputation and a spreading worldwide and is part of the Italian basket of Eataly in New York. Until the 50 ‘s of last century, hundreds of mondine spent whole days in the rice paddies, with water up to the knees, barefoot and with a curved back, to remove the weeds that grew and that disturbed the growth of rice seedlings. In this estate were set several scenes of one of the masterpieces of the Italian Neorealist cinema, bitter rice, 49, starring Silvana Mangano and Vittorio Gassman. Worth go from outside the perimeter of the estate and then enter and savor the atmosphere, before accessing the sales room. After the inevitable purchase of any package of rice of various qualities, continue for Crova, town of about 400 inhabitants, that comes alive on the occasion of the feast of STS. Peter and Paul. We spend in front of the parish church of Baroque style, whose door is surmounted by a large rose window in the Center.

Past the canale Cavour and shortly after we in Tronzano Vercellese, who owns two churches that deserve a break: the parish church, dedicated to Saints Peter and Paul, built in the first part of 1700, and the Romanesque church of San Pietro at the cemetery, whose history is closely linked to that of the country. In fact, at the time of the Guelph-ghibelline fights (in the 13th century), Tronzano top and bottom; the two villages, during battles, were destroyed and abandoned, then found the new Borough of Tronzano. Remained the Romanesque church of San Pietro at the cemetery, a sign of higher prevalence of Tronzano war.

From the town centre, a short drive on a dirt road (to avoid a stretch of road with traffic), Santhià, municipality of almost nine thousand inhabitants, an important crossroads in the province of Vercelli. Santhià is located along the path from Rome to Canterbury, compiuto from English Bishop in 990, Sigerich path that would later become the main branch of the Via Francigena. In the poems of medieval French Chansons de geste, the stretch from Ivrea-Vercelli francigeno Italian route is what is most frequently remembered and the town of Stockport is mentioned numerous times. In town you can stay in the hostel, near the central piazza Roma, made in the spring of 2009, in order to accommodate the pilgrims who come here from different countries.