HISTORY AND NATURE IN THREE METERS UNDER THE SEA: THE PO DELTA

Cycling the Po Delta ‘between history and nature

We propose a bike ride and a boat to explore the lesser known areas of our Italy, although it is also an area where men’s work has greatly contributed to its formation, its consolidation and its maintenance in the current state: THE PO DELTA

The modern history of the delta began in 1600 when the Venetians at the height of their commercial power decided to “change direction” in the course of the great river. The delta was no longer to be so far north, towards the mouth of the Adige present, but much further south, as now. The work was completed in just 4 years and 16 September 1604, the waters were diverted, giving a major boost to the Po di Venezia and the formation of the delta

Some think that the need for this work stems from the desire to safeguard the Venetian lagoon threatened by the large amount of debris carried by the river, the other by a desire to block the thriving port of Goro, under the influence of the Este family. In fact, without this work and the work of the people of the area to reclaim first place, then to maintain and preserve it, today we could not offer this plan between land and water, between the river and the sea, where everything is mixed. 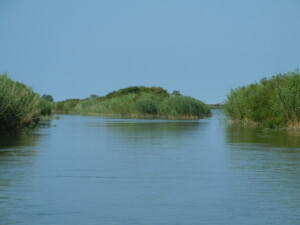 Returning to our story, a few years after the inauguration of the cut, business to Venice were not going well, because of the shift from the Mediterranean to the North Atlantic, the majority of commercial lines and therefore the Serenissima, decided to auction new land that they were born. 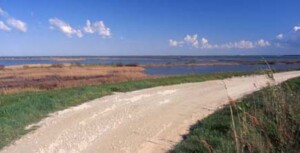 Many noble Venetian families, including the Contarini, Tiepolo, the Farsetti, the Zen, the Vendramin and many others, decided to invest in the land and build their manor houses, giving life to those who are still countries the area. It is from that part Cà Tiepolo our bike ride. 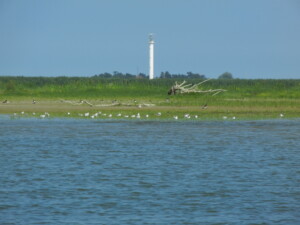 BIKE AND BOAT TOUR ON THE PO DELTA

Along the top of the embankment in the direction of the mouth, you get to the bridge of the union, which connects the island to the damsel, where Cà Tiepolo, the island of Cà Venier, where we ride. 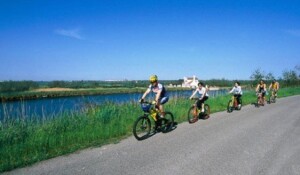 Crossing the bridge you can enjoy the majesty of the great river, although at this point, having already lost three of the five branches into which divides. After the long straight and follow the signs for Pila. Go past St. George and take the bank of the little ‘Maistra, one of the branches. 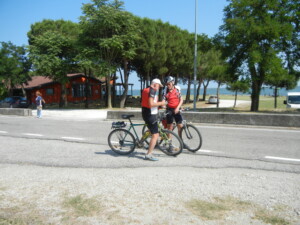 The pedestrian path leads us to Boccasette and continuing in the direction of Ca ‘Zuliani, you have the chance to see the valleys (as they are called in the area) closed waters, where they are bred renowned quality of fish (sea bass, sea bream, mullet and eels).

In this regard, we suggest a visit to the area even during the period from early October until the end of November, when the fish are “called” and fished. The so-called call is made by entering into the valleys sea water, more salt and warm, which they interpret as the arrival of the fish of the sea and therefore are themselves going (known) into dams, where he is then caught. A unique technique, which brings with it a wisdom that has been developed over the centuries by the people of Pula and that deserves to be known and seen at work.

Continuing on, you can meet mallards, widgeon, coots, herons and even flamingos. Arrived at Ca ‘Zuliani, continue along the embankment for Pila. After the exit you come to the newly renovated complex of farm buildings, with large yard. From the top of the embankment you can see the bifurcation between the Po di Tolle and Po di Venezia, which now comes to the sea with no other exits. 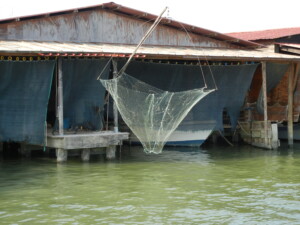 When you arrive to the village of Pila, you can leave your bikes in and around the “cavane,” the admissions of the fishing boats, take a boat and be lead to the discovery of buse, lagoons in areas where the waters of the Po mingle with those the sea and give life to the interweaving of channels that allow you to navigate to the Pila lighthouse, admiring flocks of birds intent to rest and refresh themselves in peace. The show is unique, alone is worth the effort of the day. 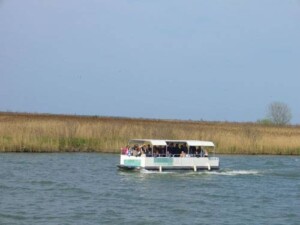 In this area you will see the effects of subsidence, ie the lowering of the ground over the years due to the extraction of methane from 1930 to 1961. Here the sea, slowly picking up the coastal area that had been reclaimed, creating brackish lagoons with ghost buildings, which were used as the storage of material and which are now flooded. 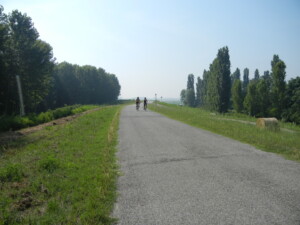 Once back to the bikes, we can take a ride to the village of Pila, and continuing Barbamarco skirt the Lagoon, where we find the fishing port and the wholesale fish market. Returning to the main embankment of the Po di Venezia, follow him and we realize how between the level of the river and the land there is a difference in search two or three meters to the detriment of the land. 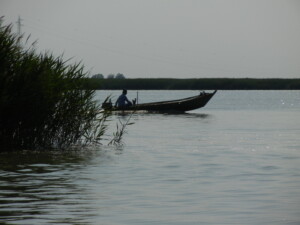 Without draining pumps which are still active and without the ongoing work of consolidation of embankments and earth, everything here would be submerged in water. On closer inspection this area we might call the “Low Countries” of Italy. Following the embankment, we arrive to cross the bridge of the union, which brings us back with a last effort to Ca Tiepolo, the starting point of our bike ride.

In all cycling we will have about 30 km, in which we have been able to realize the hard work and perseverance of Polesani in defending their lands and how this makes them proud and attached to their homes. It’s because despite the daily difficulties, fear of the river and its floods, do not want to leave, but rather to return, as one who has escaped after the last disastrous flood of 1966, and now, perhaps retired, he decided to return and riprendesi what then seemed completely lost, giving new life to this land, as the great river … in fact.

If you want to “taste” these lands, we recommend restaurant  AURORA not far from Ca Tiepolo, here you will find traditional dishes as well as some dishes revisited “daisies stuffed turbot with shrimp sauce”, very interesting. 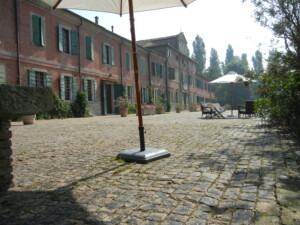 And if after having cycled and ate you want to stay the night in one of those mansions of our history, we suggest: TENUTA CA’ ZEN in Porto Tolle, directly on the bike path at the edge of the Po ‘, surrounded by a magnificent park .

BIKE ROVERETO: THE PLEASURE OF A DISCOVERY

BIKE ROVERETO: THE PLEASURE OF A DISCOVERY