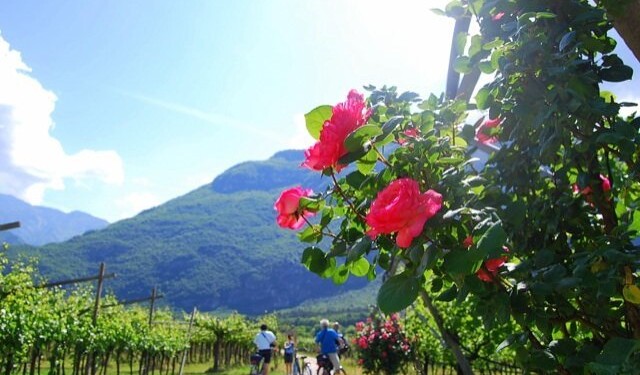 History, art and culture in the land of Marzemino 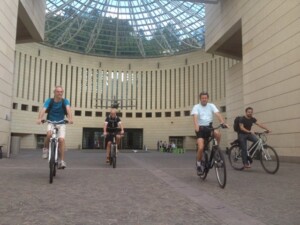 The first stretch of the Adige Valley that the Veneto plain s’inoltra in Trentino called Vallagarina. Land of vineyards and castles, historical cities and ancient villages, hiding in the shadow of the mountains that flank art treasures and spectacular, that deserve to be discovered calmly and carefully. The valley is crossed in all its length from the path  “Adige”, also called Via Claudia Augusta because it follows the road traveling along the Roman legions to the Danube. 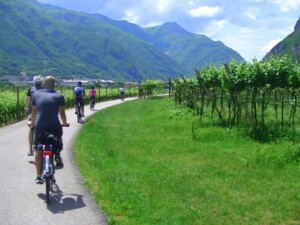 What better way to immerse yourself in the green bicycle of this part of Trentino looking at noon? Let’s start, then, in a sunny morning in early summer, from Rovereto, capital of the valley, which is worth a prolonged visit: MART, a museum of modern and contemporary art more popular in Europe, the Casa d’Arte Futurista Depero, the Campana dei Caduti, the  Museo della Guerra are the pearls of art and history that we may see at the end of tour. 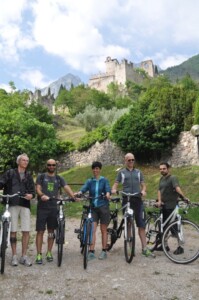 Flavio, Giancarlo, Michele, and Roberto Chiara then we take the path along the Leno, to its confluence with the Adige, and head straight for the south. Our goal is  Castle  Sabbionara d’Avio. In this stretch the bike path runs parallel to the river and it is a pleasure to ride safely, enjoying the cool breeze that caresses the shores. From the center of the valley, you can admire the peaks of Zugna, Passo Buole, the Little Dolomites and on the opposite bank, the Monte Baldo, “garden of Italy”.

Lower down, the “ruin of Dante” has traced a deep furrow in the mountain on which slabs of rock outcrops hundreds of fossil footprints of dinosaurs, that here you were walking in full giurassico.Lungo the way we meet multitudes of cyclists who are riding alone, couples, groups, bikes laden characteristic of bags, which often check the flag of the respective nationalities. By all and for all a smile or a loud ringing for greeting: it is a people traveling together we share a passion for cycling. 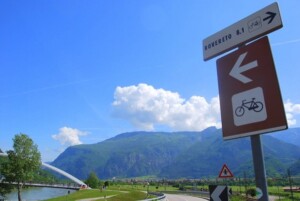 The wide, flat topography of the valley, with steep slopes, denounces their glacial origin. The wheels run almost by inertia on the asphalt, while we pass Mori, Marco, Serravalle, Chizzola. At countries open glimpses of views that call us to make frequent stops for the photo opportunity not to be missed, such as the sanctuary of San Valentino, whose white mole suddenly seems almost suspended high among the scrub forests that climb the steep mountain, up to Passo Buole. Just beyond,, Ala, city of velvet, is collected in a fan at the foot of the Church of the Assumption. Streets and squares that branch delimit the boundaries of one of the most spectacular Baroque historical centers of the province.

But it is already noon and hunger begins to be felt. Just as we are close to the goal we run into bicicgrill “Ruotalibera”, an elegant dining right on the path, to Sabbionara Avio. Irene welcomed us with a delicious appetizer of carpaccio of “salted meat” with rocket and parmesan, which is followed by a spelled with diced vegetables (dish energy but light) and a delicious homemade desserts.

From here the view is fabulous and the castle appears in all its majesty of impregnable fortress. 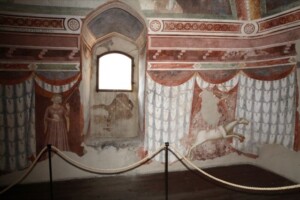 To earn the méta we climb then, a bit ‘pedal and a little’ walk along the cobbled lanes that go up to the first walls. The castle, which formerly belonged to Castelbarco that expanded the original nucleus dates back to shortly after the year 1000, is today the assets of FAI who, after careful restoration, it opened to the public. Entrance welcomes us Marco, who leads us through the crenellated walls, bunkers, barracks of the guards, the baronial palace and the imposing tower.. 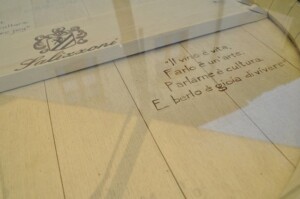 The interior walls are painted beautiful paintings of Veronese school, depicting scenes of courtly life, hunting and battles. We immerse ourselves completely in the magical atmosphere of the medieval manor and while we travel corridors and rooms we imagine to encounter anywhere in warriors, vassals, ladies, musicians and court jesters. At the end of this journey through time we realize that it’s almost evening. It ‘time to go. We inforchiamo our two-wheeled steeds and go back the Vallagarina, admiring the garden arbors crossed by the Adige. We are in the areas Enantio and Marzemino, fine red native who can not wait to taste the well-deserved dinner at ’Osteria del Pettirosso.