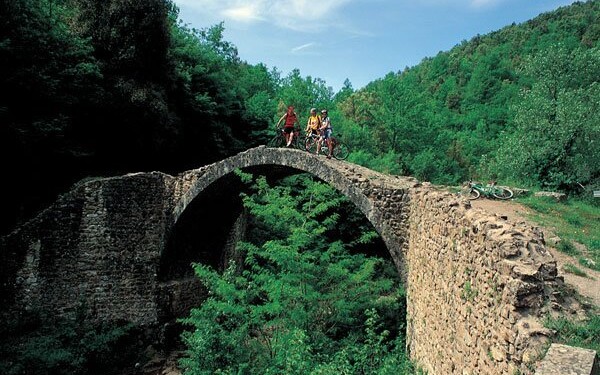 Grand Tour of the Val di Merse in Siena

Finally also the Val di Merse, charming and authentic corner of Tuscany, has a permanent cycle tour, after L’Eroica and Channel Master della Chiana, in the province of Siena is on the Grand Tour of the Val di Merse, a distance of approximately 147 km fully reported with directional panels and distanziometrici, these places every 10km.

The route is developed to 90% on secondary roads with low traffic index, by pedaling more days of pure pleasure cycling. The trail stretches over a wide area, into the heart of Montagnola, arrives at the southern valleys of the Elsa and Cecina, rolling south, until the Ombrone Valley, where the river brown creeps in Maremma Grosseto, through a typically hilly characterized by an amazing variety of natural environments, and then touch Siena.

It starts from Piazza Marconi in Sovicille to enter immediately in the Montagnola Senese. At the foot of the village continue on the right along the SP 52 “Montagnola Senese” in the direction of Ancaiano and Pievescola. Beyond the camp “La Montagnola” you continue on a nice paved road that runs alongside dense forests of oak and meets noble Sangiovese vineyards at the resort Trecciano, where the slope is interrupted by a flat stretch. At the foot of the village of Ancaiano with the church of San Bartolomeo built Renaissance architect Baldassare Peruzzi, the road starts to climb with beautiful scenic back to Passo dell’Incrociati (505 meters above sea level 7.2 km), natural watershed between watersheds of the Val di Merse (Ombrone) and Val d’Elsa (Arno). The climb, however, does not end the pass; you continue on the right on gravel road towards La Cetina. Now the slopes are no longer regular, but follow each latch that follow the undulations of the forest of oaks, oaks and chestnut trees. At the farm Morra ends the climb and after a few hundred meters, at V, keep right following the direction for Siena. The steep descent leads the SP 101 “Montemaggio” and provides, when the forest opens, superb views sulcastello Celsa. Arrived at the T with the asphalt road, turn left and, shortly after passing the large wrought iron gate that closes the entrance to the castle, you enter the town of Casole d’Elsa. At this point the road begins to climb for about 2 km on a regular basis to the pass of Celsa (12.5 km).

After the pass (573 m above sea level) at the first fork to the left, you can turn left to visit the small village of Marmoraia, where in addition to the large landscape, you can admire the fortified church of Saints Mary and Gervasio. Back then the SP 101 descend along the narrow and winding down (caution) overlooking a landscape that includes Metalliferous Hills and Val d’Elsa. After 5 km downhill (18 km), just before the village of Scorgiano, turn left towards Pievescola, which is reached by a road wavy slightly less than 5 km, characterized by typical dry stone walls, vineyards and fields of land red. Pievescola is a possible break with bar, restaurant, grocery. At the roundabout in front of the park Mushroom In love, you turn right, you pass in front of the parish church of St. John the Baptist, and then down to the junction with the SP 541 “Traversa Maremma” (24.5 km) which starts at right. After 100 m, at the next intersection, go left on SP 3 “Galleries” following the signs for Mensano and Radicondoli.

The road rises to the junction for Mensano that is left to the right, continuing on pleasant slight slope on the edge of a shady forest. At the junction to Radicondoli, before cross it, we recommend a detour to the right for about 2 km to visit the fortified village. Turning back the crossroads we take the right to Belforte / Montieri. We cycle on the ridge overlooking the Alta Val di Cecina and the mountain range of the Cornate. Once in town Montingegnoli, at the crossroads, turn left into the SP 107 “Montalcinello” towards Chiusdino (39 km).

We continue now on a road in the valley sometimes flanked by pipes that use geothermal energy.

At about 44.6 km you reach the village of Montalcinello continuing ups and downs at a time of Chiusdino. At 49.3 km in La Battellona, turn right towards Chiusdino reached by climbing for 3.5 km on the SP 31.

After visiting the old part of the village and continues on to Ciciano Montieri, but at the tourist sign indicating the Abbey of San Galgano, turn carefully on the left into a narrow street leading down steep and winding in less than 3 km to reach the SP 441 “Massetana”. Now take the road on the left (56 km) to the Palace to continue even in the plains along the river Merse to the Cistercian Abbey of San Galgano. It then continues in the direction of Siena. At about 63.6 km at the T Madonnino where you turn right along the SP 73 bis “Senese Aretina” toward Monticiano, which is reached after about 4 km (about 67.5 km).

Then on to the SS 223 “Siena – Grosseto” following the SP 32 / A “in the pine forests.” The road initially declines to the bridge over the Torrente Skirt (about 71 km), then climbs with an average gradient of 5% to the crossroads at the center of the Tuscany Region Fire Fighting “Pinewood Touches”, where you turn right towards Iesa (80 km), on the cards indicated Lama, which stands on a natural balcony overlooking the wild valley of Torrente Farma, natural border between Sienna and the Province of Grosseto, enclave nature of extreme importance for the protection of biodiversity river. Lama Square in the center of Iesa (there is a bar-food), follow the signs for Siena and Grosseto, pedaling along a nice paved road that initially continues in plain and then descends steeply towards the Lower Val di Merse. At the end of the descent rooftop, overlooking the Monte Amiata and the Alta Maremma (watch the step that forms the bridge that crosses the SS 223 “Siena – Grosseto” (85 km), continue straight until the next intersection in town where you Imposed go right on SP 4 “Petriolo” towards Montepescini. After 700 m in steep descent, at approximately 86 km, you reach the intersection for Montepescini – Casabianca where you turn left (here you can go to the ancient baths of petriolo continuing to go down for about 2.5 km, until you cross the river Farma). the itinerary is now on the road in plain white to the farm Il Santo, the southernmost point of our trip. From there you descend steeply along a dirt road a bit ‘rough, alongside a fence where it is not difficult to meet cinta Senese pigs or cows Maremma (attention to the road), until the bridge over the river Merse. from the bridge the confluence of Merse and Ombrone is a few tens of meters through the air. Crossed the river begins the climb more challenging route: from the altitude of 130 meters above sea level you climb for about 8.5 kilometers, through numerous ramps. After 1,3 km climb back on asphalt, past the village of Montepescini (in the square there is a fountain of water), continuing to the left and follow the signs for Casciano di Murlo. The slopes are still challenging to the exclusion of a flat stretch of about 2 km before the last short ramp leading up area of the village of Casciano on the hill at 460 m above sea level (97.5 km). Refreshments.

Continue straight along the SP 33 “of the Rock of Crevole” towards Murlo. After 2 km outside the village, turn right to cross the border pass Rospatoio (512 m) and descend fast towards the unique scenery of the Crete.

This leads to Murlo and crossed the new part of the village, continue along the SP 34 / c “Murlo” at a time of Murlo which is an important Etruscan Museum.

We return to the Bishopric and continue along the SP 33 in the direction of Grosseto. After about 1 km, turn right right towards Radi, taking the SP 34 / b “of Murlo,” scenic gravel road to face with caution especially in the first section in steep descent. Approximately 115 km to go back on asphalt near a crossroads characterized by a thread-like cypress.

Turn left towards Ville di Corsano and Grosseto. The SP 23 / b “Grotti” in this stretch is characterized by challenging ups and downs. We cycle now in the northernmost part of the Crete Senesi. Before we get to Ville di Corsano, at approximately 118.2 km, we recommend a brief stop to admire the small and elegant church of St. John the Baptist in Corsano, surrounded by olive groves that stretch down to the village. From the center of delleVille Corsano turn right on the SP 46 in the direction of Siena. At the end of the village, the road offers a nice slalom in the hills overlooking the city of Palio.

At approximately 123.8 km, after a short climb, a narrow downhill road on the left looks toward Mugnano. At this point wanting to visit or stay in Siena, you can reach the city with an easy detour of 10 km (20 km round trip). The itinerary goes first downhill, then uphill, straight up the hill that rises after crossing the stream Sorra. You cycle time of a typical ridge of the Crete Senesi.

Continuing straight on, past the SS 223 “Siena – Grosseto” on an overpass Moldboards Fogliano and San Rocco a Pilli. The road back to be dirt and proceed uphill to Fogliano begins where the asphalt.

At about 130 km take the road Grossetana towards San Rocco a Pilli. Cross the village and at the crossroads facing the imposing gates of Villa Cavaglioni turn right into Via del Poggetto to Stigliano, to travel a pleasant side street that slopes towards the Plan of Rosia. Arrived at approximately 135.7 km at the bridge on the ditch Luco turn left and ride on dirt roads to the junction with the SP 99 “Plan Rosia” which starts right at the time of Rosia. Along the way you meet the possible deviations towards Palazzo a Merse, where there is an old mill in 1200, Orgy, home of the Ethnographic Museum of Wood and sharecropping, Brenna, the old “sea of Siena”, where you can during summer take a refreshing bath in the river Merse, Stigliano, with elegant towers and castle towers, where the Romanesque cloister of the abbey of Santa Mustiola polychrome.

At approximately 143.6 km entering Rosia, medieval village dominated by the castle today almost unrecognizable because adapted over the centuries and the lovely Romanesque church of San Giovanni Battista flanked by an elegant bell tower. At the crossroads at the entrance of the village turn right in the direction of Siena and it takes forever SP 73 “Senese – Aretina” until Malignano, where, at the fork on the left, it continues on to Sovicille up to close, after about 146.5 kilometers, the ring of the Grand Tour of the Val di Merse.

THE SHAKSHUKA: A MIXTURE OF FULL TASTE