CYCLING THE MYSTICAL PLACES OF BASILICATA

Basilicata is a region that you do not expect . Land of light , a land that is appreciated by anyone who wants to rediscover the charm of traveling along secondary roads , the mountains and the hills that overlook unusual landscapes . Basilicata is a place of contrasts and strong harmonies , the lush forests of the lunar landscape of Matera Potenza , from the sandy beaches of the Ionian Sea to the rugged coastline of the Tyrrhenian Sea , from the green pastures of the Apennines to the yellow wheat fields of the valleys. Penultimate for population density , little traffic, with a dense network of paths , Basilicata offers the opportunity to cycle touring in safety and protected from the hazards of traffic , as well as giving you the opportunity to enjoy unique landscapes that invite you to rediscover a more natural pace of life . Along the Basilicata, not one is struck by the presence of monuments of exceptional beauty or from specific locations, but you will feel a beauty that goes slowly and carefully unearthed .

DISCOVER THE VULTURE IN SLOW

The route that we propose is on the infield of the Volture , one of the lesser known tourist areas of Basilicata, but world famous for Aglianico , one of our most popular wines doc . Aglianico was first known as the Hellenic , because imported by the Greeks , and that in itself says a lot about the history we will see , perceive and savor along the way. 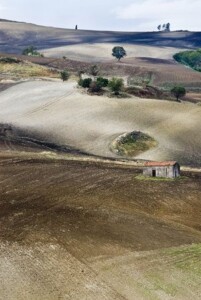 The tour as a basis Venosa , a strategic point from which to explore the area, in fact, the scarcity of traffic, except in the vicinity of the larger countries , allows you to shoot with confidence , among the vineyards and wineries of the Aglianico DOC , olive oil mills, interesting archaeological sites and medieval city centers.

Venosa is known for being the birthplace of Horace, one of the most important Roman poets of antiquity , who was born in 65 BC in a humble house of Venosa now converted into a museum. Before you leave the country you must visit the complex of the Holy Trinity , with the old church, that the incomplete and Jewish catacombs , which bear witness to one of the first settlements Semites in Italy (70 AD).

The starting point of our tour is the castle ” Pirro del Balzo “ in Piazza Umberto I in Venosa . Leaving the castle behind you , you walk towards the SS168 , begins a latch towards the bottom , so pay attention to traffic and reduce speed . After about 8.5 km at the end of a downhill , you follow the road “SP floor of the turkey .” The road is almost exclusively used to go into the fields of olive trees and vineyards , and allows peace of mind to appreciate the view of the topography of the area that surrounds us.

After following the whole country road, cross the ” SS93 ” and after turning left continue for about 4 km until you get to Rapolla , suggestive overview of wineries ( Urban Park Cantine ) , dug into the volcanic tuff , which adorn the ridge of the hill. The center is renowned for the production of a good extra virgin olive oil and also for the vinification of ‘ Aglianico . In town you should visit the cathedral , located on the top of the village , and you can take advantage of the break to sample some of the local recipes such as ” underwire little codfish ” ( fusilli pasta with the sauce of dried cod ) or dragged with mint , or even “A pan au furn ” or during the Easter period , ” the lamb on Easter Monday .”

Taking the bike we head Barile. Barile is one of the countries of Albanian origin in the region that still has ethnic and linguistic type arbëreshë . In the device are the so-called ” Seshe ” , caves dug into the tuff made ​​by the first Albanian immigrants , and still used to store wine. 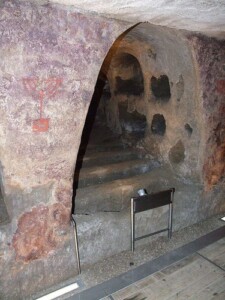 The ” Seshe ” are visible in the film by Pier Paolo Pasolini’s “The Gospel according to Matthew ,” given that the director decided to shoot some exteriors of the film in the small town of vulture . Also in Barile takes place on Good Friday , one of the oldest representations of the Passion of Christ , with living characters that turn this into a small corner of Lucania ” Jerusalem.” 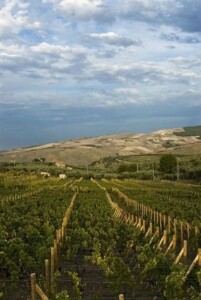 From Barile we head towards Ginestra, a few kilometers away .
Along with Barile and Maschito , Ginestra is one of the three municipalities of the Albanian Vulture. It was founded by a colony of Shkoder through the grant of Troiano Caracciolo , lord of Ripacandida , who in 1478 gave the Albanians permission to build housing. Even today, many lives are at Ginestra balkan traditions and the locals speak the Albanian language .

The uphill road leading to the exit of the small town , in fact, shortly after the turn left and follow the path of the SP10 and after a series of ups and downs lead to Venosa . The arrival is the ancient “queen viarum ” coma the Romans called it : the Via Appia , who passed through here and that made Venosa a strategic point of passage of goods that arrived in Brindisi from the East.

At the end of the tour we brought you the mileage will be about forty , but since there filled the eyes of all that surrounded us in terms of history, nature and landscape , our legs do not feel any fatigue , but our stomach will remind us that here you eat in a divine way (and where it is not so in Italy ? ) and then we just have to find a place that will inspire us and risederci , this time in a comfortable chair and order dinner ….

Bike to work? You earn more!

Bike to work? You earn more!