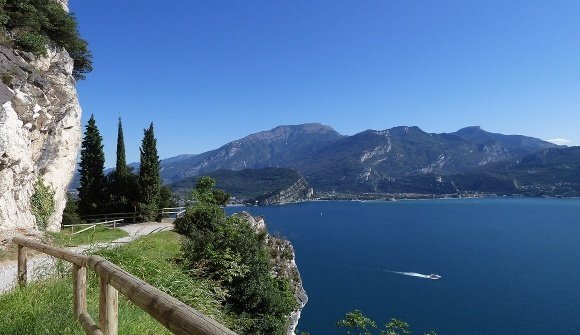 Garda Lake is one of the places where bikers from all over the world dream of going for a ride along the most scenic routes in northern Italy. We will “accompany” along one of these, perhaps the most famous.

WATCH OUR VIDEO ON MEDIASET TV

Leaving the car in Riva del Garda, take the SS Gardesana 45a, in the direction of Limone. Few meters beyond the port on the right, before the tunnel, climb along the old road Ponale, which once connected Riva del Garda with the Ledro Valley, today has been transformed into a pedestrian and cycle path with breathtaking views of Lake Benaco , better known as Garda lake.

The trail is dirt in its initial part. There are signage useful for hikers and bikers that run through it for the first time. The route runs through tunnels carved into the limestone rock and the track for the first 4 km is overhanging the waters of  Garda lake. The gradient of the slope is maintained at a constant comfortable almost 5%.

As the trail in some places and narrow enough to bike path is that by hikers in search of tranquility and a beautiful landscape, you must pay attention to traffic who comes to meet us, especially coinciding with the many blind curves.

The construction of the road Ponale, began in 1847 and was then hailed as a marvel of engineering, since, through a series of tunnels and turns, opened the valley to a smoother flow of people and goods hitherto unthinkable. The plan was cobbled street and protected from cliff overlooking the lake from masonry parapets and railings of wood. He thus had originally one of the scenic and historic of the most spectacular Upper Garda. The first cars passed through there in 1891 and the road was used until 1990 when it was inaugurated the new road. Following the road was completely closed and reopened only in 2004, to allow pedestrians and cyclists to enjoy a spectacular view to say the least. 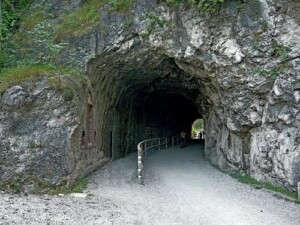 Along the climb which measures about 10 km, we can also detect the presence of numerous loopholes, galleries and Austro-Hungarian fortifications erected to prevent the first descent of Garibaldi’s troops from the Ledro valley towards Garda lake and then to defend the border of the Austro Italy-Hungarian Empire before the First World War. The unique system of fortifications in the gallery, consists of a maze of corridors and trenches dug directly above Garda lake, in a panoramic position only, Theodosius called strong or “ Ponale Cut”.

At the height of the third tunnel we have the nucleus of Ponale Cut, although the real barrier of the road with the massive iron gate with loopholes, the work developed yet in 1860, is the seventh gallery for those salt Riva.

The gallery served as the main entrance to a series of defensive emplacements which reached up to the level of the lake, starting from an altitude of 170 meters. The discovery of some coins of Emperor Theodosius, made ​​during the first excavations of the fort on the Ponale in 1860, is to justify the name of the fort.

After a few kilometers, near the ruins of an old restaurant, at the height of a bar, the dirt road gives way to the old asphalt road Ponale, now abandoned. It runs through a deep gorge, on a bridge, by which the Ledro Valley empties into Garda lake ,

and in whose bed the stream flows Ponale. From this point on, the trail climbs up a slope slightly greater with several spectacular hairpin bends in the direction of the town of Pregasina, passing into a more wooded tract, which can be reached after a final short stretch of road open to traffic. 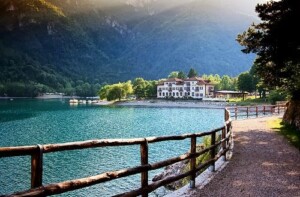 When you reach the large statue dedicated to the “Regina Mundi”, located in prime location, you can make a stop to admire the view from the top again.

We enter the Ledro Valley, and after a short piece of asphalt we pass the village of Biacesa and enter the center of Pré Ledro, and we are already on the slope that leads us first to Molina and then to the beautiful Lake Ledro, where you can visit lake Dwelling museum which exhibits the archeological finds of the known prehistoric settlement found near the lake. 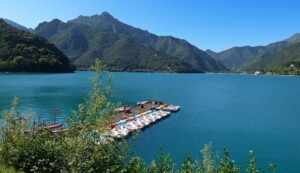 All of the lake is bordered by a bicycle path (about 10 km), which brings us back to the museum of stilts and here we return by the same route in Riva del Garda, always reminding us to pay attention to the “traffic” of bicycles and trekkers.

For any other information www.visittrentino.it