MILAN PROTEST: FOR ONE HOUR ALL LYING ON THE GROUND WITH BICYCLES

by alberta schiatti
in News
0 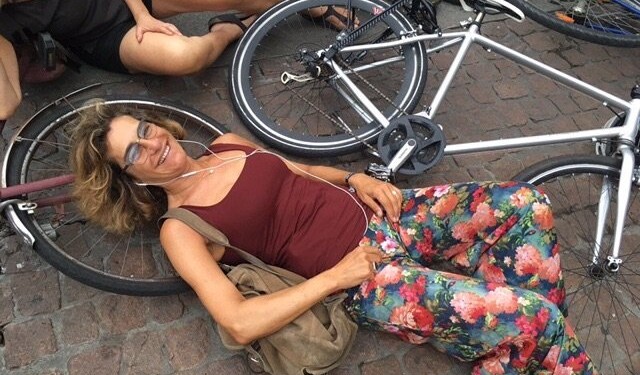 Milan as Amsterdam for an hour, but it was just a commemorative and demonstrative garrison

The cyclists who last night at 7 am occupied the entire center of Milan, making it for an hour like Amsterdam, were only armed with bells, and their sound accompanied them peacefully from the Partisan Resistance square – where they laid A “ghost bike” to the memory of the cyclist killed last July 7 crushed by a truck that “did not see it” as it often happens – to Palazzo Marino, where they stood scampanellando to call the junta’s attention on the mass in Security of the city. Staying at the end of a flash effect mob: all the protesters lying on the ground next to their bicycles to symbolize the death of cyclists.

Then, who wanted it, he could write a “letter” with his own wishes on road safety for pedestrians and cyclists to be handed over to the mayor.

There are so many things that Milanese cyclists have to ask: it goes from multiple bike lanes to the safe storage of heavy vehicles, including mirrors and sensors, for example, to undo the notorious “blind angle” responsible for a number of impressive deaths , Until you get “just people pedaling” at least in the roles closest to mobility, such as security and traffic, because, they argue, if you do not, you can not figure out what it means to pedal into traffic.

The most creative suggestion on the fly was to inflict on non-monetary non-monetary motor vehicles but in “compulsory bicycle days” proportional to the gravity of the infringement.

Will our peaceful demonstration be used to shake the conscience of the administrators? We’ll see